Michael Reinoehl, the Oregon self-declared anti-fascist who attended Black Lives Matter demonstrations and was under investigation for the shooting death of a pro Trump supporter named Aaron Danielson, was killed in an encounter with a federal task force, The New York Times and local journalists are reporting.

Federal agents from the FBI and the US marshals service had located Reinoehl on Thursday after a warrant was issued for his arrest, Troyer said. During the encounter, Reinoehl was shot by a law enforcement officer who was working on the federal task force.

Trump, who highlighted Danielson’s death in tweets earlier in the week and defended his supporters’ use of paintballs against BLM protesters, posted on Twitter moments before the story broke: “Why aren’t the Portland Police ARRESTING the cold blooded killer of Aaron ‘Jay’ Danielson.”

Why aren’t the Portland Police ARRESTING the cold blooded killer of Aaron “Jay” Danielson. Do your job, and do it fast. Everybody knows who this thug is. No wonder Portland is going to hell! @TheJusticeDept @FBI

He was killed during an encounter in Lacey, Washington, south-west of Seattle on Thursday evening, said the Pierce county sheriff’s spokesman Ed Troyer.

The news of Reinoehl’s 7 p.m. death (Pacific time) broke just hours after Vice aired an interview in which Reinoehl claimed he shot Danielson in self defense. His death occurred before President Donald Trump, who was the subject of Reinoehl’s frequent ire on social media, wrote on Twitter around 11:30 p.m. on the east coast: “Why aren’t the Portland Police ARRESTING the cold blooded killer of Aaron ‘Jay’ Danielson. Do your job, and do it fast. Everybody knows who this thug is. No wonder Portland is going to hell! @TheJusticeDept @FBI.”

Video emerged of the Reinoehl shooting scene. Be forewarned that there’s graphic language in it, and Reinoehl’s body is visible from a distance. “Damn they were not playing. I think he’s dead,” Jashon Spencer, who is recording the video, says. “I was sitting in my back yard and all I heard was pop pop pop pop. I came outside and there was a million sheriff out here and this dude lying by the mailbox. He’s bleeding. They hit him. Damn. That’s crazy.”

Thurston County Sheriff John Snaza “has confirmed that a man was shot by US Marshals in the 7600 block of 3rd Way Southeast in Tanglewilde about 7 p.m.” on September 3.

Danielson was “affiliated with a right-wing group.” He was shot and killed on August 29 “as a large group of supporters of President Trump traveled in a caravan through downtown Portland.” Oregon Live described the group, Patriot Prayer, as “a loosely organized right-wing group that has repeatedly been involved in brawls with left-wing antifascist groups.”

Reinoehl wrote on Instagram, “Happy black lives matters day!!! #blacklivesmatter #breonnataylor #anewnation.” On July 4, he shared a video of a demonstration on Instagram, writing, “F*** Donald Trump #blacklivesmatter #breonnataylor #anewnation.” The video shows people chanting “F*** Donald Trump.” It also contains repeated use of a racial slur, although it’s not clear who is saying it. Another photo on Instagram shows a demonstrator on a statue with the words “No Gestapo” painted on it. “😂 he replaced the statue,” wrote Reinoehl. 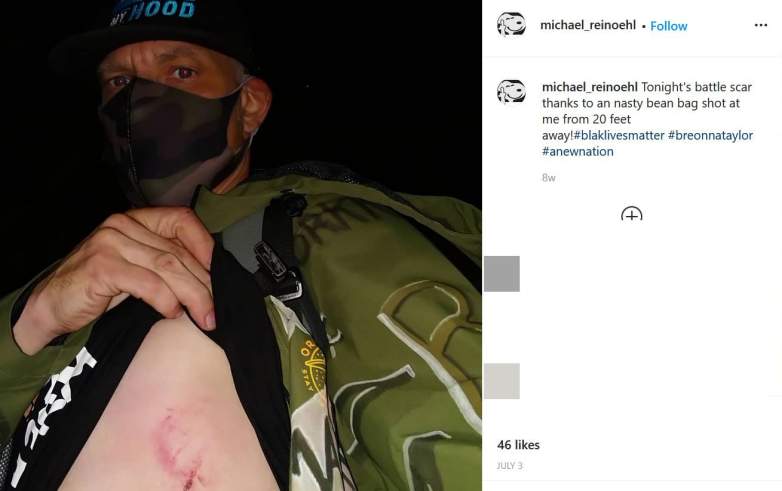 Mark David the Oregon hunter who was killed by an elk he had wounded; His Bio, Wiki, Age, Family

Mother, 44, who stole daughter’s boyfriend after she gave birth to their second child…